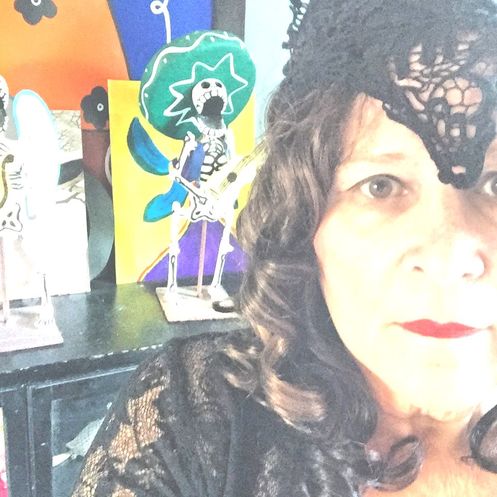 Jan (Gigi)
Redragonfly was founded by Jan Bozarth,  a thirty year veteran writer/producer in entertainment, music and media. She started as a music executive for Warner-Elektra-Atlantic and MCA Universal.  She left that Biz to start writing and creating her own content with a specialty in Children and Family Entertainment.  She has designed, written and produced over 30 games, videos,  and stage shows. Her clients include Mattel, Disney Imagineers, Random House, Girl Games, Simon & Schuster Interactive, Viacom, Microsoft, Mattel Creations, and more.   Jan is a visiting professional at Carnegie Mellon University and has been a faculty member at Banff New Media Center and on the Board at St. Edwards University, Graduate School of Business Digital Media.

Most recently Jan has dedicated her creative efforts to writing books for teen and tween girls-The Fairy Godmother Academy /Random House and soon-to-be-released, Coded4Greatness.  Along with her family of artists, Jan is always creating entertainment properties that connect the newest technologies with tried and true play patterns and the best interests of kids and families. She is an active speaker on Creating for Girls and Dreaming the Future. http://www.dreameroo.com

Redragonfly is one big family who, individually and collectively, have made creative careers in music and media and now join together under this umbrella.  Jan has mentored hundreds of young artists of all kinds. She has served in music and creative arts in many ways including the founding of The Real Children's Theatre of Texas,  The Tribes Music Business Program funded by The Kellogg Foundation and The Texas Commission for the Arts,  and serving as a NARAS Governor and participant in Grammies in the Schools.

Some of our most trusted Collaborators Are:

Shane Madden-Govinda who has enjoyed a twenty year career as a composer and performer. He has been touring the world with his gypsy beats and virtuoso violin since he was seventeen. He has composed original music for Walmart, Teen Magazine, Clueless ( game), Fairy Godmother Academy, Mattel Barbie media, Buddha Bar Compilations, and more.

Dustin and Evan Bozarth are creative royalty in the Austin multi-disciplinary arts community and around the US as digital designers and creative tech specialists with Airshp.com. As musical performers, they are  part of the roots rock group Graveltooth and the Talking Heads Tribute band, HeartByrne.  Evan and Dustin (The Twins) are sought after as music video producers for TourGigs ( Jam Cruises, River Roots Festivals, ACL, SXSW) and Festival/concert producers as well.

Terrany Johnson (Tee Double) has been a long-time extended family member and music collaborator. Tee has thirty albums to his credit.  He is a leader/mentor in the Austin music and media communities, having spots in operations or as a board member of SXSW, Urban Artist Alliance ( he founded this), Black Fret, NARAS and more.  He has been considered for Grammies and worked for the Grammy organization. He has so many cuts in film and TV, we'll only name one- Breaking Bad.